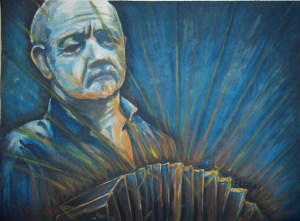 Tango Week continues here on Classically Educated and, as they say, it takes two…  Today’s guest post has been written by two people who learned the dance far from its traditional home, and who can give us the perfect complement to Alex’s Tuesday post: the view from outside of Argentina.

Our first guest poster prefers to be known only by his WordPress sobriquet: iwasforcedtoregister.  Our second, Alejandro, was born in San Juan, in the northwest of Argentina. He did his undergraduate studies in Civil Engineering in the Universidad Nacional de San Juan, and his graduate studies in the University of Illinois at Urbana-Champaign, USA. Even though he is currently working as a postdoctorate scientist at the École Polytechnique Fédérale de Lausanne (EPFL), in Switzerland, he is already looking for Professor positions within Europe.

Alejandro gives complimentary tango lessons at the EPFL to everyone willing to explore this part of his heritage. He also participated in the organization of the 2013 Tangofolies de Lausanne festival as artistic director. Currently, Alejandro is also looking into exploring a new facet of the tango world. He made his debut as a singer during the 6th Bergen tango marathon, in Norway, and he does not waste opportunity to sing whenever he goes to a tango event.

One of the best things I got from tango was the friendships. At the top of the list is Alejandro Aragón, from whom I am now separated by an ocean, but with whom I constantly connect to discuss different events in our lives, although we inevitably end up talking about tango.

We both had a similar introduction to tango. We are both Argentines who were brought up in Baby-Boomer households where the predominant artists were The Beatles and The Rolling Stones instead of D’Arienzo or Troilo. We both left Argentina in our late 20s to get our Master’s degrees (different states in the US) without really paying any attention to the genre, until one night, thousands of miles and years apart, each one of us were listening to  a song we probably heard several times before when something suddenly clicked. Maybe it was just regular nostalgia, but this music, that once felt ancient and dated, resonated with all the frustrations and loneliness of our immigrant experience like nothing else ever did before or since. We didn’t know it at the time, but we were hooked.

Our Tango experience differed from most Argentines because it started outside Argentina in, of all places, the US. It’s not the fact that not everyone understands the lyrics, but it does start with the fact a few come into it with the lens of years of watching or practicing ballroom tango, which is as close to Argentine tango as figure skating is to ballet. If that were not enough, with the distortion of distance, some people here resort to YouTube videos in order to imitate that spectacular step sequence they saw in a tango show in Buenos Aires (which was choreographed for foreign audiences). Moreover, some of the great traveling Argentine teachers who come here are encouraged to spend their rime teaching as many steps as possible. Steps, steps, steps, steps; as if tango was nothing more than a coordinated dance routine, where acrobatics is the equivalent of technique. Of course, this is a gross over-simplification since there are also some genuine “tangueros” here, but you get the point. What is exactly the same in every milonga around the world is the oxymoron of a relaxed atmosphere while drinking with friends, coupled with a scrupulous scrutiny of other’s technique, love life, and whatnots.

So, what is Real Tango*? What beginners and outsiders have in common is that the former will give you a meticulous definition, and the latter a confused one, but both will be ultimately wrong. Advanced dancers will usually say one word: ”Uf… “ and switch to a different topic (within tango, of course).

What everyone feels in tango is that bliss, that adrenaline filled dance that ends with a strong connection with the other person, and although you probably won’t remember what steps you performed, you will remember that dance; and believe you me, that feeling has such a high intensity that it will shake you to your core and you will mistake it with love, passion, and anything and everything that feels worthy and powerful. It will create a hole that cannot be filled with anything else and you will look to repeat that feeling, which as technique improves, it becomes more scarce but more intense too, and you will spare no money for classes, no distance will be too far to find a decent partner, and sleep will become an overrated commodity. In other words, you will become a tango junkie. It happened to Alejandro, and now that tango occupies a major part of his life he is becoming a recognizable character in some European tango cities. It happened to me, although this addictive circle full of happiness and bad habits was broken by the most wonderful person on earth, a tango-heathen who is now my wife, who was the only person capable of filling that hole I had in me, which now I realize was only uncovered, but not created, by tango. And if you were wondering, this effect also happens to these few miscarried US tango dancers as well, although every time it happens it sends them marching double time towards their mecca of unlimited cool tango moves.

Yet, they are mistaken. That’s the conclusion both Alejandro and I reached, after spending our obliged time learning “steps to impress”, as we both later understood that tango is not about the show.

For me, tango became an emotional outlet, a psychologist to whom I withhold no secret and hid no vulnerability, where without words I offered every 3 minute partner a simple proposal: “I will give myself entirely to this moment with no regards to where the song will take me physically or emotionally, come with me.”  I can remember every time someone accepted wholeheartedly. Steps never mattered, because it was never about trying to amaze people on the sidelines who will never be able to guess what happened in that dance. It’s not about anything you are trying to express or communicate, as your partner will probably never guess what’s going on inside your head (unless you are trying to be creepy) and if there’s anything you are trying to say, it will probably interfere with the dance. The “tango high” is all about that physical and emotional un-choreographed synch which is built on both absolute trust and absolute abandon. 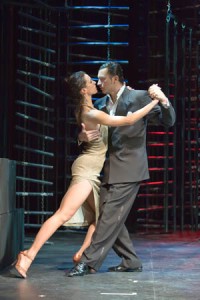 Still, I wanted validation, and what I got from my friend was an article he wrote that was published in a tango magazine that was almost, but not exactly, entirely unlike my definition. The following is his article:

“What is tango? I was asked during a radio interview in Switzerland. And I stayed there… without being able to say anything. Because saying that tango is a just a feeling or passion would be the most unfair thing I could have said. In the end I don’t even remember what I said. But then I wondered why I couldn’t say anything, and I concluded that not answering was much better than saying something empty. I concluded that I couldn’t say anything because I just can’t summarize in a sentence or two what tango means to me. And now, alone, I ask myself the same question…

Tango is the shelter I find from a system that imprisons almost everyone, where to engage you have to follow exactly what you have been taught since your childhood. It is the escape from the stress produced by that system, where my mind can finally disconnect and think only about feeling and producing passions.

Tango is the legacy of the masters, who left us so much by just following their vocation. It’s that internal struggle between D’Arienzo and Di Sarli, which shows two sides of me, very different but equally vehement. It’s that violin solo put by Pugliese from time to time that gives me goosebumps.

Tango is her, the woman to whom I taught the dance. To whom one day I couldn’t teach anymore and with whom I started to grow. The woman who marked me for life, and who will be always remembered every time I hear Poema. The woman who one day, after splitting because of differences, said to me: thanks for giving me tango.

Tango is them, the boys, who share what I feel but who don’t know how to express it other than with a lápiz or a parada. The wizards who draw, and those who try but still enjoy. Those who constantly come with stories that are woven between tanda and cortina. Those who laugh while dancing, and those who suffer when listening the lyrics, and those who seduce and are driven by feelings.

Tango is my homeland, which I miss so much, but to which I can’t return because it has betrayed us so many times. The city I try to come back from time to time to reduce the nostalgia. The land by which I try to be worthy emissary, wasting no opportunity to hold the blue and white high.

But above all this, for me tango is that insatiable quest for harmony. A search that sometimes forces me to travel because I can’t find what I’m looking for where I live. Harmony that seems to come across in that tanda for which I’ll smile in the coming weeks. It is the search for that woman, who still does not come into sight, the woman I’ve searched for my entire life and who seems to hide between giro and adorno in a remote milonga somewhere in the world I haven’t visited yet. That woman with the sublime embrace that I haven’t felt just yet, but which I would recognize immediately, for I would have finally found the harmony that I pursue”

So even though we started our tango journey in the path of “exported tango”, I know we are both starting to understand it as if we would have studied in Buenos Aires. Because when you find yourself immersed so deep you neither know nor care which way is up, you don’t need to follow someone else’s definition of tango, you’ve made it your own. (Unless, of course, you still think it’s about steps). 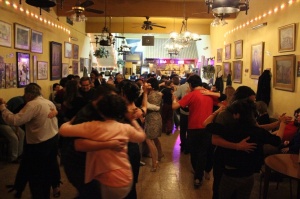 (*) Real Tango©, as observed and approved exlusively by the legitimate, quasi-independent and virtually irreconcilable, pontific milongas of San Telmo, Almagro, Uquiza, et al; and, under no exception, prohibited from copying, reproducing, modifying, distributing, displaying, performing, or be merely stated or implied, without written consent, outside the boundaries of formerly mentioned sacred entities. Amen.