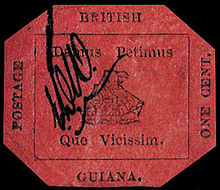 Like many of the traditional hobbies, I’m certain that if you ask most westerners about stamp collecting, most will probably say it was something their parents or grandparents did.  They’d probably follow up with “There are more compelling new ways of spending time, including Facebook games… why would anyone spend a long winter afternoon sorting stamps?”  This is a genuine question

If you happen to ask one of the small percentage of people who actually take their noses out of Candy Crush long enough to know what’s going on around them, they might be aware that a stamp from British Guiana recently sold for around $10 million – but like most pastimes of the super-rich, this will also feel like something that doesn’t apply to them.  Telling them that, by weight, it’s the most expensive object known, probably won’t help.  The yellow stamp below probably wouldn’t be far behind if offered for sale.

Well, that depends.  While it’s obvious that no one sends letters anymore, and most packages don’t have stamps applied to them, so stamp production isn’t what it was.  It’s also pretty clear that school-age children don’t see collecting bits of paper as much of a competitor to their iPads… so, yeah, it seems that the hobby (like a lot of others) is disappearing.

But that is only if you filter your perception of the world through Western eyes. Two countries in which stamp collecting has taken off in recent years are China and India.  It has happened in different ways and with different dynamics, but in both places, the hobby has become extremely widespread among the emerging middle classes.

Now, this just illustrates, once again, how most Westerners – whether they are from Canada, Belgium, South Africa or Paraguay – have a huge blind spot when it comes to just how many things, important things, are happening in Asia right now (note I don’t include Australians on that list – they know it very well).

Most people sense that the future of the world is slowly moving East, but they can’t seem to grasp the concept in a “so how does this affect me?” way.

Well, one way it affects you is that if your grandfather had an old collection of stamps, I’d look at the asian ones carefully…  You never know.

But more importantly, it’s interesting to see how they are collecting in the East.

As mentioned, China and India have different philosophies.  The Chinese concentrate on their own heritage, so stamps from classic eras are of little interest due to the Colonial ties.  PLus, they are often non-traditional investors, so stamps often go into their portfolios.  The innocent-looking monkey stamp illustrated is not that old…  But is worth $1500 (full sheets can be worth $150K).

Indian stamp collectors, on the other hand, are a more varied lot… because many of them are children.  The reason for this is that the hobby is actively encouraged in schools.  I assume I don’t have to spell out for you how popular anything that Indian youth is interested will become when that generation grows up (if I do, you’re reading the wrong blog).  Indian’s are also understandably fond of the post-independence stamps, especially anything showing Gandhi (stamp below was record at over $200K)!

So, we can confidently assert that the stamp collecting hobby is actually growing… So that should give you a nice fact that no one knows at your next party.  Even better, everyone will say “no way” and make you look good if you quote the above.

We know our readers don’t need this help… but we’re happy to offer it anyway – we don’t want you looking like Dilbert: