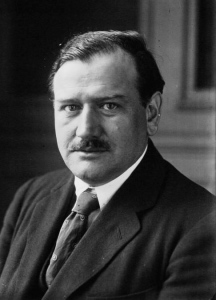 Lost among the striking images we have of World War II are the often even more important political maneuvers that took place among political leaders before and during the war.  This fascinating chess game is often overlooked, which is unfortunate.  Luckily, however, we have access to excerpts from Stacy Danielle Stephens’ monumental historical novel about the war – and she knows exactly how to highlight the important parts of that political history – whether it be in Europe, Asia, Africa or America.

Today, she takes us on a quick tour of the big picture as things began to heat up.

Édouard Daladier had become Prime Minister of France on January 31st, 1933. In March, Polish Dictator Marshal Piłsudski had suggested to him that Poland and France should together attack Germany and depose Hitler. Daladier, however, preferred the Four Powers Pact[1] Mussolini proposed on March 19th, 1933. When Deladier signed the Four Powers Pact, in June, 1933, Piłsudski decided it was time for Poland to come to terms with Hitler, and began negotiating a German-Polish non-aggression pact.

Adolf Hitler’s most unpopular act in his first year as Chancellor was a ten-year pact signed by Polish Ambassador Lipski in Berlin on January 26th, 1934, pledging mutual non-aggression between Germany and Poland[2], including a promise to defend each other against attack.

In France at this same time, a financial scandal brought down the government headed by Camille Chautemps. A new government formed by Édouard Deladier on February 6th was brought down by rioting that same evening[3].

On February 12th, Labour Unions in France had called for a national strike to protest the demonstrations of February 6th. Communists and Socialists also co-operated in the protest, working together for the first time in twelve years. It was a germinal moment for what would become the Popular Front.

“At a time when all of us have but the one earnest desire to heal the wounds of the past decades in peaceful cooperation with other nations,” Hitler was concluding his speech of March 7th, 1934, “we are happy to give to the world a visible demonstration of the background of the problems which concern us today and proof of the skill with which we master them. Thus I am happy and proud to declare the International Automobile Exhibition of 1934 in Berlin open to the public.”

In a later interview, Hitler told Louis Lochner that “the aim and the purpose of all progress must be to make a nation as a whole, and humanity as a whole, happier than before.”

Hitler wanted German automakers to mass-produce an automobile the average German could afford. Of course, the new factories necessary to build several million autos could be retooled to produce several thousand tanks or aircraft easily enough. 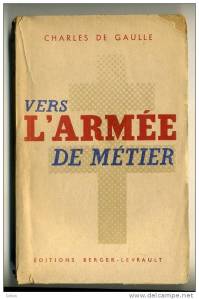 In May of 1934, Colonel Charles De Gaulle’s book, Toward a Professional Army, was published in France. In it, he proposed the creation of an elite force capable of deadly strikes[4]. This force would total seven divisions composed of men serving six year enlistments, rather than the eighteen-month conscription which was the standard in France at the time. Six of these divisions would be armoured, with one regiment each of heavy and medium tanks, supported by a battalion of light tanks for reconnaissance, as well as engineers and artillery. The seventh division would be mechanized infantry.

De Gaulle’s book was not well received by the army overall, because it defied standard military procedures, and because his proposals were not compatible with France’s reserve system. It was even less well received by the general public, because a professional army was considered reminiscent of the military coup that had ended the Second Republic in 1851, and which re-established the French Empire[5].

On June 14th, 1934, Hitler flew to Venice to meet with Benito Mussolini. Although they made several public appearances over the course of three days, they spoke privately, without keeping any record of their discussions.

Time Magazine reported that the only official statement the two dictators made, issued after Hitler had returned to Germany, was that they had begun a “cordial spiritual collaboration,” but also reported that the two were rumoured to have come to an agreement concerning Austria. 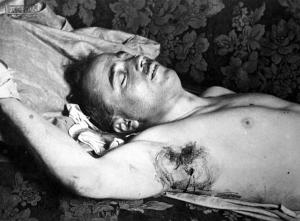 On July 25th, 1934, Austrian Nazis assassinated Chancellor[6] Engelbert Dollfuss. Guessing that this was an attempt at Anschluss, Mussolini moved several army units to the Austrian border, indicating that German intervention in Austria would not be permitted. Obviously, the two dictators had failed to come to an agreement regarding Austria.

The assassins were apprehended in Vienna and executed. Kurt Schuschnigg became Chancellor of Austria.

[1] A plan under which Britain, France, Germany and Italy would arbitrate border adjustments between or among European nations. Mussolini’s intent was to obtain French and British assistance securing the borders of his Austrian and Hungarian allies against Hitler. The Poles and Czechoslovakians saw it as a weakening of collective security and an accommodation of Hitler at their expense. That France, with the construction of the Maginot Line, appeared to be planning for a defensive war against Germany, which would leave Hitler at liberty to attack France’s allies, greatly reinforced this perception. The French Parliament never ratified the Four Powers Pact.

[2] This meant that the western half of Prussia, as well as the small sections of Pomerania and Silesia which had been taken away under the Versailles Treaty could not be wrested from Polish administration by force until 1944. As it happened, the Polish Corridor would be the least of Germany’s concerns by 1944.

[3] Deladier, a Radical, had dismissed a conservative police official. Conservative protesters attempted to seize the Chamber of Deputies. It is not clear what their intentions were, but the establishment of a provisional fascist government was among the possibilities. One police officer and fourteen rioting civilians were killed in the mêlée, and more than a thousand injured.

[5] Toward a Professional Army was highly regarded in Germany, where its principles were not only embraced, but enthusiastically applied when Hitler later created Panzer divisions capable of lightning war.

[6] He was in practice a dictator, modeling his “Austrofascism” after Mussolini’s example, having also aligned his government with Italy.