The nice thing about our Manifesto is that it allows us to cheerfully jump from the horrors of WWII weapons of terror to light-hearted reviews of science fiction anthologies without batting an eyelash.  Perhaps the move we are making today is conceptually much smaller (although, admittedly, the last time we discussed films we went on and on about crazy Russians), but it does take us back to somewhat darker themes.

Film noir has often been analyzed from an aesthetic standpoint, and with good reason.  The darkness and visual cues (such as venetian blind lighting) are signature moves.  But today, in analyzing a film that is often credited with creating the noir look, we’re going to be contrary and look at the characters, a sordid little bunch.

Let’s begin by saying that 1944’s Double Indemnity is a film with a bunch of unforgettable scenes and plot devices – perhaps the most memorable of which is the dictation of the story into a recording device by the main character.  Having said that, it’s not actually an enjoyable film.  One doesn’t watch this one with the same pleasure as, say, The Maltese Falcon.  Though the characters are equally down-on-their luck, and often just as self-serving as the ones surrounding Sam Spade, they don’t have that touch of black humor or dogged streak of hidden nobility.

Despite not being enjoyable, that’s probably what has made this film so respected even seventy years later.  Think back to 1944.  There was a war on.  The public was thinking of heroism, of sacrifice – and so many films of the time reflected that.  The ones that didn’t at least attempted to give the audience some sense of humanity’s redeeming qualities…  and along comes Billy Wilder with an unflinching look at the seamier side of human nature.

This is a film where the main character is a heel, where the girl is worse than he is, and where even the supposedly pure younger woman’s innocence and decency can very easily be called into question by cynical viewers.  It looks at the real world, a world in which Sam Spade is as likely as a flock of flying unicorns.

It moves along at a decent clip, piling intrigue upon intrigue until, by a commodius vicus of recirculation, we are back where we started, but we now know why the man is dictating into the machine.

It works, it’s powerful, it’s much more true to life than most of the hardboiled genre… but you won’t like it as much. On a scale of one to five, we give it three Schlemmons.*

*For an explanation of the Schlemmon system, see here… now we just need to get someone to create a Schlemmon icon for us.

Our editor-in-chief, Argentinian SF writer Gustavo Bondoni gives us his take on what, to him, is nearly a modern book: The 1989 Annual World’s Best SF, edited by Donald A. Wollheim.  Due to our shock at the fact that he has managed to move beyond the 17th century, we are unable to write any further comments. 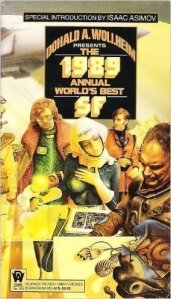 When most readers think of the science fiction genre, there are a few names that come to mind almost immediately: Isaac Asimov. Arthur C. Clarke and Robert Heinlein are probably the first three.  Well-read modern readers of the non-fan persuasion will likely also add Frank Herbert to the list.  Readers of this blog, of course, are probably more interested in HG Wells, Jules Verne, Aldous Huxley and George Orwell.  I would add Mary Shelley (and we’ll soon have an article about her seminal work here) to that list, of course, but she always gets lumped in among the horror writers despite clearly being an SF author.

What these names have in common is that the youngest among them wrote their best work in the 1960s… Dune was written 50 years ago this year.  It’s a sobering thought.

I believe that if one stops a random reader in a random book store anywhere in the world, the chances are that they will not be able to name a single adult SF author active after 1980.  Again, I’m not counting the hard core genre fans here, nor am I counting Young Adult or Fantasy authors.

The reasons for this have been covered elsewhere, and can be summarized in the fact that the SF genre has moved away from being the literature of ideas to a pseudo-intellectual playground where PC zealots rule the postmodern roost*.  It is understandable that many people avoid the genre altogether.

But it’s also unfortunate, because there is still a lot of excellent fiction being produced, even if it has to claw its way past mountains of preachy political correctness.  So, as a public service, whenever I read a piece of science fiction deserving of mention, I’ll post a review here.

The book I’m focused on today isn’t particularly new, but it does fall after the imaginary cutoff date of 1980, so we’ll give it a shot.  Donald Wollheim is probably best remembered today for founding the Daw imprint, but before that, he was a notable editor on the SF scene.  His credentials were sufficient that any Year’s best antho that he edited was taken seriously by the genre.  The 1989 edition was no exception.

This one includes a number of stories by big genre names that might not be recognizable outside the SF world, such as David Brin, Kristine Kathryn Rusch and Frederick Pohl, and most of the stories are entertaining… but there is one that, despite (or perhaps because of) being a romp simply stands out from the rest in a huge way.  That story is “Peaches for Mad Molly” by Steven Gould.  It tells a story of people who live on futuristic arcology-like highrises.  Of course, these particular characters live on the outside of the buildings, which makes them outcasts from a mainstream society which they feel has gone wrong.  The action, emotion and adventure all comment on the central scientific advances proposed, which is what science fiction was supposed to be all about.

The rest of the stories are interesting on a different level: some do hold the reader’s interest in the same way as the Gould, while others begin to foreshadow the descent of SF to today’s boring confusion (the Rusch, in particular foreshadows today’s uninteresting themes, but does so much better than most of today’s writers manage).  The late eighties time of transition is deeply important from a scholarly point of view (and also as the time when the writers of earlier eras such as Pohl were giving us the last of their magic).  The Golden Age truly closed at around this time.

An interesting read, certainly, but not a timeless classic.

*If you don’t believe me just google “2015 Hugo Award Controversy” for an example of a recent reaction against the silliness.