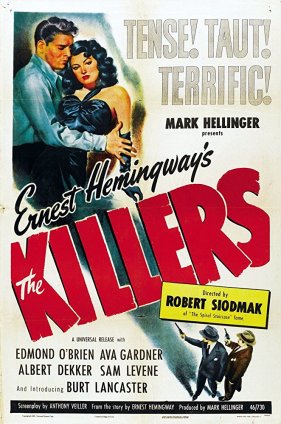 One has to feel for the producers of 1946 film The Killers.  While it’s true that not many films can claim to be the single adaptation of an Ernest Hemingway story that the great author truly liked, and it was also a commercial and critical success, one can’t help but feel that it is just another noir film in a decade full of them… and while The Maltese Falcon, The Big Sleep and their ilk are revered today, The Killers is all but forgotten by casual cinephiles.

This is too bad because it’s a pretty good movie.  Some of the plot points that weren’t lifted from the Hemingway story are at the far end of plausible suspension of disbelief but, other than that, this one is a winner.

Essentially, the plot isn’t about the killers of the title at all, but revolves around their victim and why he was killed.  It does so with all the noir elements you could ever want.  Untrustworthy dame?  Check.  Two-bit hoods?  Present.  Heart-wrenching betrayal?  Yep.  It flows well, with the big reveal at the end coming as something of a surprise, but not too big a shock.

And yet, other than fanatics like the Classically Educated crew that watches the 1001 movies obsessively in order, few people you might encounter will ever have heard of it.  I guess that’s what happens when you arrive just that tiny bit too late. 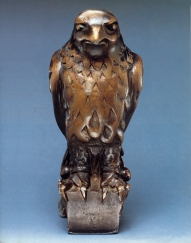 Interesting things about this film are that it gave Burt Lancaster his first big break (even though his role was as the victim of the killing).  But better still is that another actor in the film, William Conrad, was a) the narrator of Rocky and Bullwinkle and B) the owner for quite some time of one of the two Maltese Falcons ever made.  It’s nice to see that someone involved in the film was linked to The Maltese Falcon, anyway.