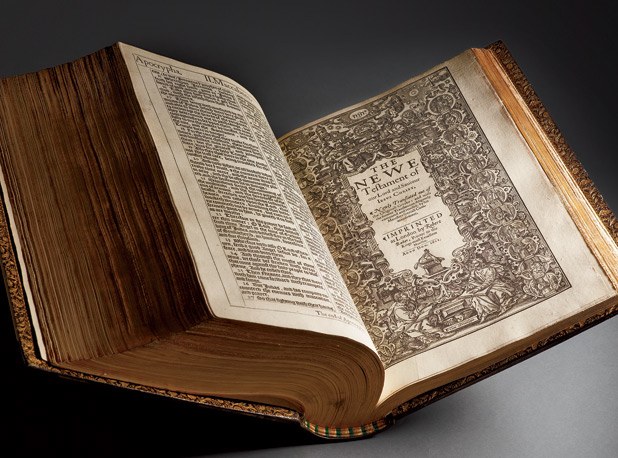 There are some books that all aspiring writers MUST read, no excuses accepted.

In English, I can think of two obligatory tomes.  The first, and one which we’ve discussed here before, are the complete works of William Shakespeare (yes, even Cymbeline).  I’ve never really found anyone who argues this point… I’ve found a lot of would-be writers who haven’t read this, but all of them think they should have.  After all, much, if not all of what came afterwards was built upon the structures created by old Bill.  It’s so deeply ingrained into the literary language that we take it for granted, and when, as the BBC has recently begun to do, his influence is made explicit, we shake our heads in wonder.

The other book seems to be more divisive, but is a book that is even more influential.  It is, of course, the King James Version of The Bible.

A lot of writers, mainly for political reasons, absolutely refuse to read this one.  Some will be angry that I’m mentioning it here.  As an atheist myself, I can tell them that they’re not very smart; reading the KJV has nothing to do with religion, and everything to do with understanding the roots from which the tree of English-language literature, including the most radicalized leftwing tracts of today, grows.

But its influence doesn’t end with the dozens of sayings and cultural and moral baselines that it has injected into society.  It is also a book that took the best of the oral traditions and, over the years, honed them until each became the most convincing version it could be.

Of course, the bible does mix it up a bit.  On one hand, you have compelling narrative spots (the extremes, Genesis and Revelations come to mind), but it also has mind-numbingly boring spots (Leviticus, I’m looking your way).  In fact, I’d say that about half of the text itself has little to no impact on the public consciousness today, especially when it comes to the Old Testament (although I’d love to know just how strictly modern Judaism keeps to some of the tenets – if anyone knows, would love to hear from you in comments).

So reading it is a slog of rules and names and measurements of temples in arcane units at times (broken up by the narrative bits, which are quite good).  This isn’t Dan Brown.  You won’t find it un-put-downable.  But the time invested is worth the effort (my own payoff came when, during a game of trivial pursuit, someone asked me how many psalms were in the Book of Psalms… A question I would never have been able to answer before reading all 150 of them – hopefully, your payoff will be deeper than this).

The upside is that you’ll get to read firsthand stuff you hear or read about every day.  From Samson to Adam and Eve, from Jonah (man was he minor) to Jesus, it will be an important element in your cultural toolbox.

So I read the whole thing.  It took a while, but it was definitely worth it.  I wouldn’t, probably, do it again, but I would definitely recommend a cover-to-cover reading of the KJV as one of those bucket-list experiences that a writer needs to have under his belt.  It will make you a better author.

And yes, you’re allowed to take my name in vain as you struggle through Leviticus.

Gustavo Bondoni’s novel Incursion is supposed to be even better than his popular book Siege.  You can check it our here.