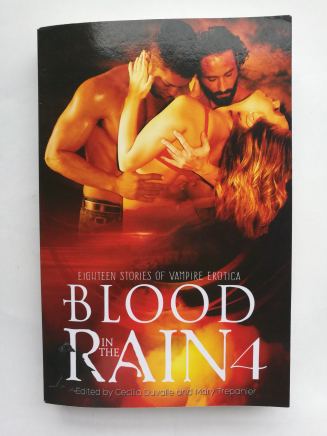 Now that I’ve read it, I can state that the content within is exactly what it says on the tin: vampire erotica.

Now before you run off, I need to say three things that surprised me (as someone who doesn’t read all that much modern erotica).  The first is that the stories in this volume are uniformly well-written.  On a sentence level, the writing (and don’t tell anyone I said this), is of a much higher quality than that which you’d find in a non-erotic science fiction or fantasy volume of the same payscale.

Secondly, the definition of what a vampire is gets examined and plenty of different roles, good and evil, victimizer and victim are studies between the sheets of this book.

Third, there is much less preoccupation with politics than in the rest of the genre.  This book is lovely in that any personal politics the author might have are left behind.  And that means you actually get decent stories instead of manifestos.  SF and fantasy editors need to take note.

In fact, the weakest story of the bunch is the single story that is a political revenge fantasy.  Included, one supposes, for variety’s sake, it was the single clunker as a tale, although well-written.

As for the sex, all varieties are sprinkled in here and, like me, you will probably find some stories that turn you on while others might make you squirm a bit.  Which, quite possibly, is the whole point.  In my own case, male / male stories aren’t my cup of tea, but there are a couple in here, “Lawful Evil” by Erin Horáková is memorable that worked for me as a tale despite being male / male.  In fact, almost every single story was excellent, with well-done sex scenes central to each.  Vampires lend themselves well to that.

The best of the bunch was “The Prisoner” by Bill Davidson, a long story with a twist ending that nevertheless follows logically from the themes developed inside.

This one is highly recommended (and not just because there’s one of my stories in it).  The quality of writing is superlative, the sex is sexy and the vampires are memorable.  What more do you want from life?

Gustavo Bondoni is a novelist and short story writer.  His novel Timeless is a fast-paced and sexy thriller, and you can buy it here.