I was at WorldCon in Dublin last year and I met the publisher of Fox Spirit Books, to whom I’d recently sold a story for their book American Monsters Part I.  This is part of their FS Monsters series which already included award-winning volumes.  It was an honor to be a part of the anthology, and it was even better to receive the book and look through it quickly.

The thing was gorgeous, a square format, comics, great authors.  Just a wonderfully presented book overall.  I immediately understood why the earlier installments in the series had been so well-received.

After spending a little time with the publisher group in Dublin, who is a very laid-back and funny human being, I told her that I was surprised that they’d produced such a serious series.

Fortunately, they took is well and I count them among friends as opposed to having landed me on the blacklist, but it’s definitely a wonderful feeling to know that awesome art can come from fun people who don’t take themselves too seriously. 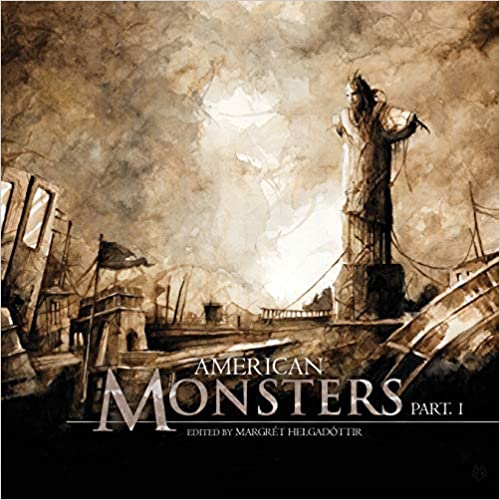 As you know, I’m a sucker for beautiful books, so having a contributor copy of something that looks this good is just wonderful.

But the best part of it all was that I eventually got to read my copy and revel in the amazing job that editor Margrét Helgadóttir (a great writer in her own right) did in compiling, translating and introducing the work in this volume.

Simply put, the content matches the presentation.  Each story is very different, and each explores a chilling expression of Latin American myth, with monsters mostly being  from before colonial times.  The fact that these are most certainly not European monsters adds an unfamiliarity which makes many of them truly chilling.

My favorite story was Christopher Kastenschmidt’s “A Parlous Battle”, both because it’s very well written and because I tend to enjoy adventure fantasy even more than the quieter types.  This one is set in his Elephant and Macaw Banner world which is quite the universe (there’s an RPG and a novel, too).

Honorable mention goes to the comic “Perla del Plata” by Paula Andrade which, as a native of Buenos Aires hit very close to home, especially the phrase “We have made sadness an art form.”  Perfect.

Anyhow, I recommend this entire series.  There are big names in every book, and they look fantastic.

Gustavo Bondoni is an Argentine novelist and short story writer.  Those of you who enjoy fantasy and science fiction set outside the usual European and US settings will love his collection Off the Beaten Path.  You can buy it on Amazon.