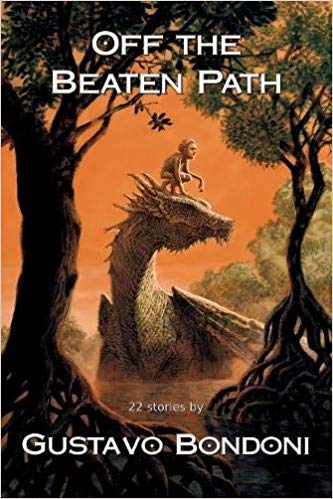 Most books have a story behind them.  This one is no exception.  When I started writing short fiction for publication, back in the mid-2000’s, there were very few people from the non-English part of the developing world writing original work in English.  Oh, some people were translating stuff that happened to land on their desk, but it was a scattershot effort.

So, mixed in with my more usual fare (fiction set in an American or Western European setting), I loved to change it up on editors a bit and drop my characters into unexpected places.  So you get a noirish dystopia in Namibia, a parrot story in New Zealand or a straight up SF espionage tale on the moon… in which two of the antagonists are India and China.

These stories sold, so I kept creating them until, almost without realizing it, I soon had enough for a book dedicated to just my published work that takes place, as the title suggests, off the beaten path of traditional SF.

And it just happened that I already worked with the perfect publisher for a book of this kind.  Guardbridge Books is based in Scotland, but has specialized, since its launch, in books from different cultures.  They had published my novel, Outside, and when I pitched the idea, they were delighted to have a look… and they, like the editors who’d bought the stories initially, also decided to publish.

Of course, they asked for a couple of new stories, which I was more than happy to write, and which round out the book wonderfully (of course I think that… I’m the author!).

So, that’s the genesis of this particular book.  Have a look!  Buy a copy!  Hell, buy multiple copies…  give one to all your friends.  Sign it and pretend I did it (I’ll back you up).

Anyway, you can buy the book on Amazon and at Barnes & Noble.  Let me know if you enjoyed it.

Most of you know me as a science fiction writer, while others have read my horror or fantasy work.  So my latest book launch might come as a bit of a surprise… but I’m happy to announce that today is launch day for Love & Death, a narrative composed of intertwined stories.

Innumerable experts talk about getting out of your comfort zone in order to grow, but I’ll take it one step further.  For a new book to be any good the writer needs to be confident in the genre they’re working in…

The result?  I’ll let you judge for yourself – below are purchase links for every conceivable e-delivery method (paperbacks are coming soon):

If you do pick it up, drop me a line – always delighted to hear if readers loved a book or if they hated it.

Gustavo Bondoni is an award-winning novelist and short story writer from Argentina who also likes to blog about anything that catches his eye, mainly of a cultural nature… often not.

Every author on the planet loves book launch days.  That moment when people around the globe can (finally!) enjoy the fruits of all the hard work in writing, rewriting, selling the book, working with the publisher to edit and givin suggestions for cover art.

The Malakiad, my comic fantasy that takes place in Heroic-era Greece launched today.  You can buy it at Amazon right now.  Yes, right now!

As a special bonus for Classically Educated readers, I’d like to tell you about the genesis of this paticular volume.

It begins (as many of my writing adventures do) in the late 1980s when I read Another Fine Myth by Robert Lynn Asprin.  That was my introduction to humorous genre work, which eventually led to my love for Douglas Adams and Terry Pratchett.  I devoured each book by these guys as soon as I could get my hands on them.

Unfortunately all three are now gone, having died much too young.

Worse, I am unsatisfied with the current crop of humorous genre writers.  The problem isn’t their talent–I believe most aretop-notch writers–but the type of humor they attempt: watered-down, milquetoast and nowhere near as funny as their precursors.  The problem, I believe, is that genre humorists today are genre writers first, humorists second.  So, like most people in SFF, they are extremely aware of the sensibilities around them and write in such a way that no one at all could ever be offended.  Punches are being pulled in unforgivable numbers.  The books are set aside with a sigh.

That method isn’t particularly funny.  As Seth MacFarlane or Mel Brooks would tell you, the secret isn’t to offend no one, but to offend everyone equally.

And that’s why I wrote this book.

The Malakiad won’t offend too many people.  It’s meant to make you laugh, not to make anyone unhappy.  But it does poke fun at human foibles and it does ridicule things that are open to ridicule.  I wrote, in essence, the book I wanted to read, hopefully the kind of book that the great writers of the past wrote.

Is this one as good as its predecessors?  That’s for readers to say.  Critics, of course will be fed to the nearest large carnivore (unless they like the book, in which case they are extremely intelligent people who should be celebrated).

For now, all I’ll say is that, if you miss Douglas Adams, Terry Pratchett or Robert Asprin, you could do much worse than to give this one a go.

Gustavo Bondoni is an Argentine novelist and short story writer.