I always thought that a well-written story could pretty much overcome any apathy towards the subject matter itself.  Hell, if you think of the stakes of the last book you read, odds are that they only matter to the characters themselves.

And yet, when reading Arthur Hailey’s novel In High Places, the major stakes were essentially the possibility of Canada combining a good chunk of its sovereignty with the US.  It was written from the Canadian point of view, and it’s pretty safe to say everyone was gravely concerned with the possibility that things might go one way or the other.

Canada’s fate failed to inspire even the slightest interest.  I couldn’t care less, so the main political cut and thrust of the book lost a lot of its strength.

Fortunately, there was a subplot which affected the larger events in which a young lawyer attempted to win a court case against all odds.  That held my interest sufficiently that I was able to finish the book in a reasonable amount of time.

Hailey sold a ton of books (including the later-filmed Airport), so I suppose a lot of people cared about his subjects and I’m in the minority here, but this one didn’t do much for me at all…

Apparently, political intrigue of great moment to Canadians is my threshold for stuff that actually IS too uninteresting to read about, even in the hands of a master page-turner of a novelist.

This one allowed me to discover more about myself than about the book.

Gustavo Bondoni is an Argentine novelist.  His latest book is a collection of science fiction and fantasy short stories that take place outside the usual American and European settings.  It’s entitled Off the Beaten Path, and you can buy it here. 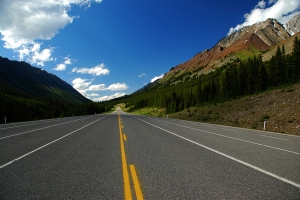 Today’s entry continues our series of guest blogs, and is perhaps the one (so far), that best summarizes what this site is all about.  Our guest today, Ace Lightning is a woman of many, many talents (as the piece itself will hint), having been everything from a Wiccan priestess to a broadcast engineer – which is a scope that is impressive even by the standards of this blog!  It tells of a familiar feeling for world travelers, and one that never gets old.  Enjoy!

My second language, after English, is Spanish, with French a very poor third (some random phrases I picked up when I worked at UN Radio – they inexplicably placed me in a French-speaking studio – and culinary terms). I live in the New York metropolitan area, and it’s easy to reach southeastern Canada from here. I had been to the cities of Montréal and Québec, and enjoyed both greatly. In Québec, I had occasionally had to resort to my fractured French, but as soon as I mentioned that I was American, not Anglophone Canadian, everything was all right.

When my son was in his early teens, we decided to take a family vacation along the St. Lawrence River. Neither my husband nor our son speaks a word of French, although we all speak Spanish. I was hoping I’d be able to see the Northern Lights (an obsession of mine); my son wanted to see moose in the Parc Gaspésie; and my husband was interested in seeing what Canada was like outside of the major cities. We flew into Montréal, rented a car and drove to Québec, then drove out along the river, staying overnight in a different place each night. Our accommodations ranged from a rather nice hotel in Montréal, to a rustic motel in Rimouski that had a door which opened out directly onto the beach of the river. The further away from the major cities we got, the less English people spoke; I soon found myself having to do most of the communicating. I had to teach the menfolk a few phrases, such as “Je suis Américain“, “Je ne parle pas français“, and “Où sont les toilettes?” I also watched French TV in our hotel rooms – usually MéteoMedia, the Canadian weather channel. Soon I was able to order meals for three people, buy petrol, and ask for (and even occasionally understand) driving directions. Everywhere we stopped, one of us would ask, “Do you speak English?”, and someone would reply “A leetle beet!”… which turned out to be the extent of their English. It was often frustrating, but also fun. (My husband and son just found it frustrating, although my son was often amused as well.)

We stopped in Cap-Chat, because I was especially interested in Éole – a huge vertical-shaft wind-powered generating plant, built as a “proof of concept”. I was immensely fascinated and impressed by the simplicity of its engineering. The tours were only given in French, and I wished I was able to ask more questions, but I still learned a lot. (Note: Éole is no longer in operation, although the structure is still there; the site is now an education center concerning wind-powered and other alternative sources of electricity.)

We went all the way out to Gaspé, stayed for two days, and drove back to Montréal. I insisted on stopping at Éole again – this time they found someone who could describe some of the machinery in English. We also visited the site of an old copper mine, which had been made into a historical center, although we didn’t have time to take the tour of the mine itself. We made our way back to Montréal and flew home to New Jersey.

A day or two after we got home, I was describing this adventure to a friend, who said, “That must have been awful! Weren’t you terrified, being in a completely unfamiliar place, and forced to try to communicate in a language you barely know?” I said that, on the contrary, it had been positively exhilarating – I described it as being “like aerobics for my brain”. My friend couldn’t grok that at all; my mere description of the experience gave him a panic attack. Then I described it to another friend, a White Russian who had been raised in Paris and spoke something like 103 languages. He grinned and said, “Oh, yes, that’s always so much fun! But there aren’t many places where I can’t make myself understood.”

Next time, I want to try something really difficult, like trying to find my way around in Finland or China.