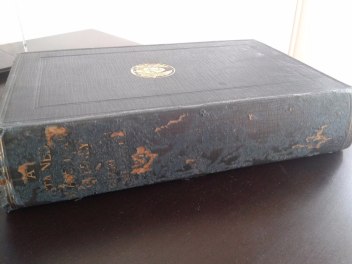 In the early twentieth century, tourism was mostly an upper-class pursuit.  Due to the way the upper classes were (and to a certain degree still are) educated in those days, this made for a very different kind of tourism.  The mere concept of going to Coney Island for a Hot Dog Eating Competition would have been met with a mixture of derision and outright disbelief.

While you’re not really going to find too many equivalents of the glorious Grand Tours in the years just before the Great War, you still found erudite madmen going off on interesting expeditions.  Heirs to Victorian obsessions, these adventurers were hobbyists and diarists that make the people who dress up as Stormtroopers for Comic Con (or worse, science fiction writers) look like normal, well-adjusted human beings.

Many of them left books behind regarding the unlikeliest of subjects, I was delighted but unsurprised when a volume entitled A Stained Glass Tour in Italy appeared at the annual jamboree at our local Anglican Church.

But, before I talk about the book let’s talk about this church.  I’m not religious in the least (and certainly not Anglican), but I love the place.  It is a lovely stone building that looks like it should be situated somewhere in fictional Wessex in the early 19th century and not a block from my house in the middle of a heavily built up sector of one of the world’s megacities.  It was the perfect spot to find a book like the one above, my copy of the Stained-Glass tome. 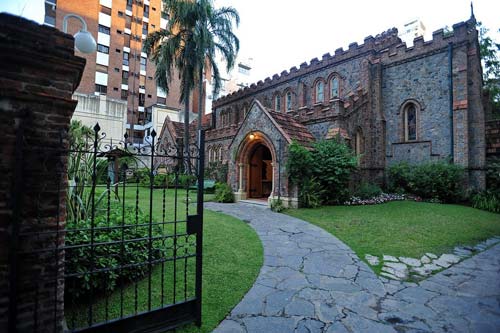 The book itself is a first edition, albeit worn frayed around the edges and well-aged, and probably the thing that I loved most about it was the fact that I was the first person in its over 100 years of history to read the thing completely.  How did I know this?  Because some of the pages were still uncut.  So, for two dollars, I purchased a journey back in time and the thrill of trying to separate pages with a steak knife (long story) without tearing them.

The book itself was a charming example of something that would never have been touched by a modern day publishing house.  A couple of wealthy friends go on a tour of northern Italy for the express and arcane purpose of viewing significant works of stained glass in the regions churches.  As they guide us through the towns they visit, the focus is on the glass and a brief history of the art form, but glimpses of life in the Italian countryside before WWI peek nostalgically through.  My lasting impression of this book is one of sunlight bathing dusty country roads and sand-colored buildings, slightly crumbling but once magnificent.

The book itself is interesting, too, with a number of laid in photographs and a strangely folded map, its production values would be dismissed as an amateur production today, but carries the stamp of the Bodley Head, a major publisher in 1911.

But it’s the writing which carries the day.  This book functions as neither a comprehensive guide to Italian stained glass nor as a reasonable tour guide for the era.  A labor of love, written – and likely published – with little or no consideration for any commercial value, in a tone that is as affectionate towards the subject as it is to any reader interested enough to open the volume.  It’s the work of a generalist who happened to love stained glass, a product of a polymath and a man of his time (Charles Hitchcock Sherrill – ambassador, athlete and stained-glassophile) that we like to think would be an avid reader of Classically Educated today.

We were definitely avid readers of his book!

Gustavo Bondoni is an Argentine writer.  His best-known book is the science fiction novel Siege.