I stumbled over The Travels of Marco Polo almost by accident. If you’d asked me, I would have stated my intention of reading it someday, but whenever I’m off buying books, I never seem to think of it.

But a friend was clearing out her library (she said that, at eighty, there are a few books in there she probably won’t read again), and this was one of the ones she gifted me.

The Barnes & Noble edition I received is a hefty book, coming in at around 600 pages, of which 400 is the actual text of the book. The fact that you have 200 pages of end notes tells you a bit about the edition: it’s a heavily annotated and explained version, with every place name and custom given a clarification.

But that doesn’t tell you everything. This is a reprint of an early 20th-century edition, doesn’t affect the main text–it’s a very good translation–but the end notes refer to place names that are no longer recognizable, uses other medieval travelers as corroborative evidence and treats much of Asia as terra incognita. It’s probably a wonderful resource for comparative cartographers, but not for a general reader. In the end, I only used the end notes to try to figure out where in Asia Marco was at any given time (this is not easy sometimes, solely from the notes).

But that puzzling editorial oddity (I’m pretty sure there are modernized editions out there, but maybe B&N didn’t want to pay copyright fees on an eight hundred year old classic) aside, this is a wonderful book. Marco’s look at cultures, peoples and places is marvelous. Of course, some of it is apocryphal hearsay and all of it is affected by his medieval preconceptions… but it reads in a surprisingly modern way (the end notes are much more arcane in text style).

My entire conception of the world east of Constantinople during the reign of Kublai Khan was modified… and, unless your a scholar or enthusiast of non-European medieval cultures, I would bet yours will change as well.

Definitely worth the read. You’ll be transported to a place that was wondrous and a time where if something seemed magical, you were permitted to believe it was. A wonderful follow-up to the Shackleton book.

Gustavo Bondoni is a novelist and short story writer from Argentina. He loves spending time (real or imaginary) in faraway places, which is why he eventually ended up with enough published stories for a collection of tales set outside of European or US settings. Off the Beaten Path is a wondrous journey to the far corners of the globe, and you can check it out here.

Spring in a Small Town is not a film I’d heard of before the 1001 Movies list brought it to my attention.

This isn’t surprising, for any number of reasons.  In the first place, I’m not really a fan of subtitled or translated films.  I’ll watch them only after critics have unanimously anointed them great, and then, as in this case, seventy years later.  Chinese films fare no better than French flicks in this case (unless there’s nudity and sex… I’ll always give nudity and sex a chance).

But there’s more to it than that.  Spring in a Small Town is a film that, by not being expressly political was essentially blacklisted after the China’s communist revolution, and has really only been rehabilitated today.

It’s even pretty hard to find online (well, it’s easy to find if you speak Chinese, but subtitled versions are a different story); your best bet if you can’t get hold of a deluxe DVD collection is probably the subtitled version on YouTube. 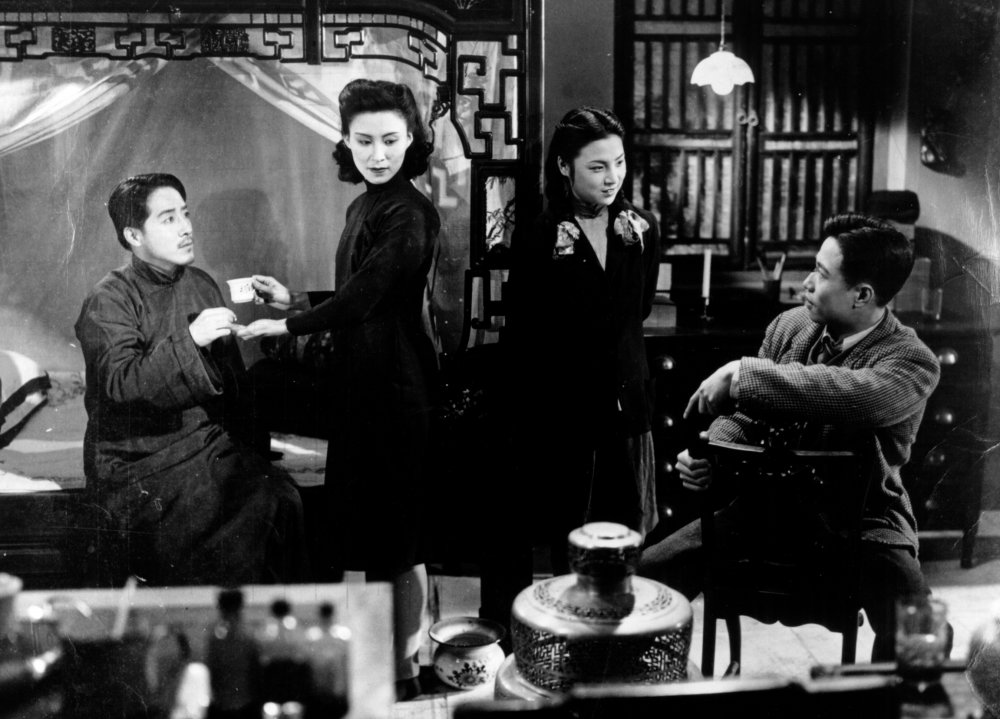 All of this conspires to hide a true gem from popular consumption. This is a film whose sensibilities are more likely to be found in a French film from the sixties or seventies (with the requisite amount of nudity) than anything contemporary Hollywood was churning out.

I don’t want to spoil it for anyone, so I’ll just give you the setup.  A woman, the main character lives an unhappy life with her ailing husband.  The man she was hoping to marry before the war turns up, not to visit her, but to visit her husband who is an old friend of his.  And then they’re off and running, not flinching nor turning it into the kind of infantile comedy or melodrama that Hollywood would create.

Awesomely, Wei Wei, the actress who played the leading role, is still alive today and has been recently active.  We salute her!

Gustavo Bondoni has recently launched a collection of linked literary stories that create a single narrative.  The book is called Love and Death, and you can have a look at it here.

Being a global citizen is emphatically not an exclusively Western thing, particularly over the past few decades, where India and especially China have become huge drivers of the world’s population and economy.  Today’s guest writer, Vero Nica, spent a long time in China.  Unlike most Westerners who visit China, she wasn’t “just looking”, so to speak – she moved there, and had to work to make ends meet.  As you can imagine, she has amassed a wealth of amazing stories and insights and, better still, has agreed to share some of them with us.  Enjoy!

I arrived in Beijing in November 2006, with a job as an English teacher. I had the right qualifications for the job. Mainly, I looked foreign. This leads us to an interesting insight into the imagery of the Chinese population: all foreigners speak English. Therefore, the main characteristic needed to teach English at that time was to look foreign. Nationality, education and actual level of English were rather distant second considerations. However, I hear that has changed now, as you are expected to have a passport from an English-speaking country – and preferably, look foreign.

I felt in a different world. I had studied Chinese for a year, but quickly realized it was nowhere near enough the level I thought it was (particularly my pronunciation of the infamous 5 tones). It was surprising, though, how far the words “this”, “that”, “thank you” and “how much is it?” took me those first few weeks. Anyway, the first few days I didn’t explore much, as I was adjusting to the time zone, the college (a joint Canadian-Chinese venture), the job, the apartment, etc. I did, however, need to eat and clean the apartment, so I ventured out to get the necessary supplies.

The staff at the school had provided teachers with a computer-generated map to a supermarket catering to foreigners (meaning, expensive imported stuff, but in a language you could actually understand), and I headed that way. It was just two blocks away, but when I got to the first corner, I found a biggish sort of obstacle. It was the meeting of two two-way streets, and was fairly busy by my standards.

I stood there waiting for the light, and started to cross. And I was surprised to see that cars did not seem to respect the traffic light a whole lot. I made  to the other side in one piece, but the episode left me confused. A bit of background is in order here, I think.

I have lived most of my life in Buenos Aires, Argentina. Why is this important? Well, I am completely used to being on the receiving end of aggressive driving and having drivers treat traffic lights, speed limit and driving regulations as suggestions, as opposed to something that actually needs to be respected*. Still, cars can only advance – in any direction – when the light is green (with the exception of the usual homicidal/suicidal rascal who goes on ahead regardless of said traffic lights, other cars/pedestrians and anything else that might prevent them from gaining those precious thirty seconds). If you are big into survival skills, I do advise a trip to downtown Buenos Aires during rush hour. For the complete ninja experience, try a busy crossing with no traffic light. I have been to other places where driving rules are different, but they weren’t as notorious since drivers STOP for pedestrians. But I digress.

After a few more tries, I figured it out. There WAS a traffic light, and it worked,and people respected it, but traffic seemed to pour continuously into the street. Why? Well, I discovered that cars/motorcycles/mopeds/buses/etc. can always turn right, without having to wait for the traffic light, as do bicycles. At the same time, when the traffic light was green, oncoming traffic could turn left onto the street I was trying to cross.  None of this is legal where I come from, and made for some interesting/crowded moments, and made me feel like an owl every time I stepped off the sidewalk.

Chinese drivers have a few saving graces, though: they don’t drive fast, and they usually signal their actions. Not only with their lights. If they drive into the “turn” lane, they will turn. This, of course, is radically different from my native country, and initially added to the confusion.

The important thing is not to panic, grab your towel, do as the Romans do, and submerge yourself in the challenge (and the smog, as it was) of opening your mind.

*I am usually a pedestrian or obnoxious cyclist. I do turn into a wilder beast behind the steering wheel.