I’m pretty sure that a deep love of literature and art is not often corresponded by an equally deep passion for all things automotive, and that whenever I write about cars, some of my readers just skip that bit.

But I wanted to take a moment to talk about Motor Sport magazine, which, like Road & Track (which I’ve talked about here before quite often) is a classic publication that has been around for a certain amount of time.

But Road & Track, born in 1947 started out borrowing articles from established journalists that had made their names in the British motoring press, in Autocar, The Motor and, yes, Motor Sport.

Founded in 1924, and with a green cover that acknowledged its British heritage (green is the racing color for Britain), Motor Sport is one of my favorite magazines, and one of the few automotive publications I read regularly despite having gone through several different editorial directions within the past couple of decades.  It even had a red cover at one point (gasp!).

Well, for one thing, it focuses on race cars, which are the most exciting part of the automobile kingdom.  For another, it keeps the modern stuff to a minimum and concentrates on the history of racing, which is where the romance and heroics live.  I assume that today’s action will become more interesting as the hidden stories come to light, but right now, all we have are results.

A good case in point is the issue I recently finished reading (and which prompted this post), the February 2018 magazine.  This one combines a huge tribute to the late Colin McRae with current (well, from 2018) Formula One news, an interview with Adrian Newey and another with Gordon Murray–probably the two most groundbreaking designers in the past 40 years of F1–plus reports on classic car racing and a feature on Group C.

For anyone with a love for the history of racing, this is paradise.  I won’t recommend that you go out and buy an issue, because I assume that anyone with an interest in motorsport will already be familiar with it.  But on the off chance that you’ve been living under a rock for the past nine decades, go get an issue.

You can thank me later.

Gustavo Bondoni is a novelist and short story writer whose Military SF novels Siege and Incursion have been well received.  You can check them out here and here.

Let’s go back in time to 1988.  Why?  Just because I happened to read a couple of car magazines from that year (I promise to get back to the normal, more literate style of this blog in the next post, but today, we’re doing car mags again – here, here and here are the earlier installments of this series) and I wanted to keep my thoughts about them more or less all together before I forget what I was going to say.

It’s one of the prices of getting older, but aging also has its advantages.  I get to look at thirty-year-old magazines and judge them with a future perspective. 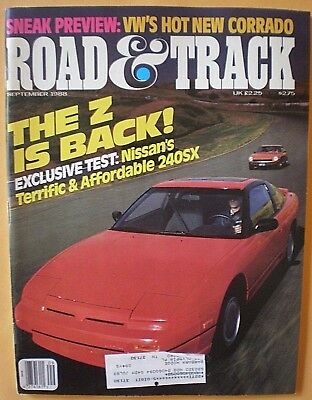 The first thing one notices is that the two mags appear to have been designed by two different graphics departments.  The monthly magazine feels very much a product of the eighties, while Exotic Cars looks forward to the nineties, a departure from the earlier installments in the series, which looked much more similar to the magazines.

The Exotic Cars series was one of Road & Track Specials, which explains the discrepancy, a series that was run by Thos L. Bryant, the man who later–as from January of 1989–became the editor of the regular magazine.

This one was, nostalgia aside, much better than the early installments of Exotic Cars.  The selection of cars was mature, the design was excellent, and the writing engaging.  It was a solid effort which was easier to read than its predecessors.

The regular magazine looked a little dowdier, but that impression only lasts until you flip open the front cover.

Once you do that, you are transported to different world.  Not the world of 1988, though.  Road & Track in the late eighties bore little relationship to the universe of Gordon Gecko and the Coca-Cola Wardrobe (remember that piece of eighties awfulness?).  Instead, you’re almost transported to the Scottish moorlands somewhere around 1975.

This might not have been seen as a good thing in 1988, but it’s certainly wonderful reading these old pages today.  The words flow comfortably, and the reading never becomes a chore.  It’s a warm pleasure from cover to cover, like conversation with an old friend.  It was literally one of the most pleasurable reading experiences I’ve had in a long, long time.

Of course, in the eighties, warm and fuzzy was on its way out and, as I’ve mentioned, December 1988 was the last month under John Dinkel, the man who edited this issue.  The January 1989 issue had adopted the design of the specials and looked bang up to date.

The writing, however, was still essentially the same.  It would take a few years to iron out the quirkiness that made 1988 a vintage year.  Bryant was an excellent editor who brought the magazine upscale while keeping its personality alive.

So, for some time, we lived in the best of both worlds.  And I was luck enough to be thirteen in January of 1989…

Gustavo Bondoni is a novelist and short story writer whose most recent book is entitled Ice Station: Death.  You can check it out here.

Can you quote a lot of writers?  I mainly can’t.

Sure, I remember some Shakespeare from when I was in high school, and everyone knows the first part of the opening sentence to A Tale of Two Cities, but I’ve never really been one for literary quotes.  I generally try to stay away from other people’s words and to create my own phrases with, it must be admitted, varying degrees of success.

There are a few writers I can quote verbatim.  I’m always telling anyone who’ll listen that the opening line of Daphne Du Maurier’s Rebecca is the greatest opening line in all of literature.  I can also, by dint of having read it a lot, quote great chunks of Douglas Adams’ Hitchhiker’s Guide series.  But, despite reading dozens of books every year, that’s it.

There’s one exception, though, and I bet most readers of this blog won’t have heard of him.  In my opinion, one of the best writers of the past 40 years – in fact, possibly the greatest writer still living from the point of view of craft – isn’t a famous novelist.  In fact, he isn’t even a writer of fiction.

He’s a journalist… well, sort of.

Peter Egan was a long time columnist for Road & Track and Cycle World, two magazines which are not noted for their dedication to literary criticism.  While he often got drafted in to write features for those two publications, his true genius was in teaching us about life.

Not his life, not even particularly the life of a lifelong gear head and car and bike nut, but about life itself.  I am tempted to say that he used his experiences with an eclectic assortment of malfunctioning machinery (much of it British) as a metaphor for the vicissitudes of daily existence but if I were to write something and mindlessly pretentious as that, I fear the man himself would never forgive me.  So I won’t.  I’ll just say that, if Mark Twain had owned an endless string of cars and bikes (and guitars) and lived in the latter half of the 20th century, he’d write about the same as Peter Egan.  Except Twain would be emailing Egan for advice.

Yes.  The man is really that good.  Folksy and self-deprecating but with a solid literary background underlying (and belying when he isn’t careful) this image, the prose makes you want to read until you drop, and then keep reading, propped on the hospital bed on one elbow while the nurses keep saying that if you don’t get some rest, you’ll lose the other kidney.

His collected columns come in two series.  The Side Glances series collects his work for Road & Track, while the Leanings books are his columns for Cycle World. 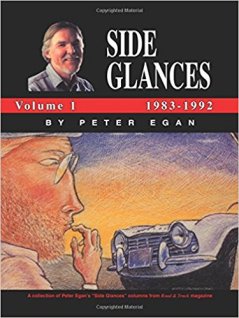 I recently read the first in the Side Glances books (I have volumes 2 and 3, but this one had been hard to find on Amazon until recently) and, though I’d already read and reread many of the columns in the magazine itself, was once more transported by the sheer truth of Egan’s way of looking at the world.  The cars are, very nearly, secondary, but if you have any tendency to go out and buy old cars to restore, stay away from these books.  They will lead you down questionable financial paths. 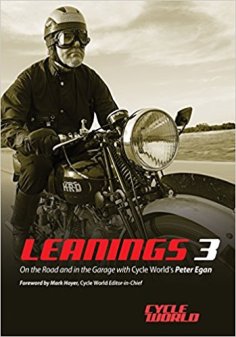 I only bought the first of the Leanings books because I like Egan’s writing.  I didn’t really care for motorcycles when I started reading this one.  And yet, I have recently finished the third volume of the series… and I suddenly find that, though extremely unlikely to go out and buy a brand new sportbike, I wouldn’t mind learning to ride on an old Norton.  Such is the power of this guy’s writing.

I always forget to name him among the two or three writers I most admire.  He’s not a writer of fiction, after all, and I don’t really find journalists of any kind inspiring in the least.  But this is an exception.  Peter Egan is truly great and only his very specific, and highly non-literary niche has kept him secret.

I know most of you are shaking your heads right now and saying “Bondoni has finally lost it.  Mind you, he was always close to the edge, but now he’s fallen, kicking and screaming, right off.”  All I can say in my defense is that you’ll have to trust me.  Find one of these books.  Read even one or two columns (they take about five minutes to read).

You can come back and thank me any time you want.

Gustavo Bondoni is an Argentine novelist and short story writer.  His latest novel, released in 2018, is The Malakiad.