Pratchett’s Discworld is one of the most beloved fantasy worlds ever imagined.  It’s right up there with Middle-Earth and Hogwarts, and yet it goes about the task quite differently.

In Tolkien and Rowling’s world, the universe achieved perfection centuries or eons before the events that unfold in the books.  The characters are usually struggling to keep a way of life alive or–in the case of Tolkien–to return things to the state in which they were back in the good old days.  In both cases, evil is personified in the entity that wants to change it, to shatter that way of life.   In fact, though both Voldemort and Sauron (or Morgoth in the earlier mythology) are evil in other, more obvious ways, their true crime is to try to break the idyll.  It’s a pattern that writers in the literary genre use as well, though in the cases of Waugh, Bassani and Ishiguro they don’t bother to disguise the true nature of the evil.

Readers, of course, can identify and respond to the sense that all times in the past were better.

Pratchett, on the hand accepted none of the wallowing.  The Discworld might be sitting on a giant turtle, perched on the back of four elephants, but it is more flexible and realistic than most other fantasy worlds, because it changes.  And while I have an image of serious writers thinking about how serious issues in our world would be reflected in other places, I have an equally vivid image of Pratchett sitting around and saying… “I wonder how the nutjobs on the Disc would react to suddenly having guns?  Ooh, that could be fun to write.”

And he didn’t do it as standalones that wouldn’t affect his other work, either; every single one of these issues changed the Discworld on a fundamental level, and Pratchett reflected that in later works. 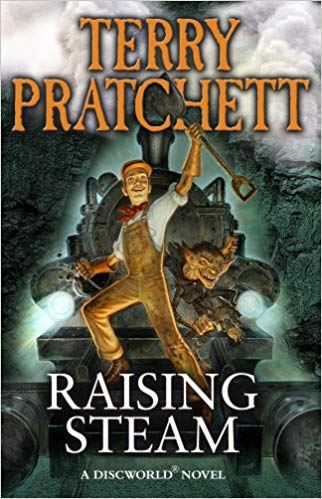 The deepest change of all comes in Raising Steam, sadly the very last Pratchett book I will be reading for the first time.  In this one, he brings the Industrial Revolution to the Disc.  Everyone reading will know that the bucolic, strangely provincial life of even the most sophisticated Ankh-Morporkers are going to change forever, the lifestyle of the previous dozens of books will die away, blown through the desert by the winds of change.

And yet, you find yourself cheering the train-building heroes on.  Let them win, let them burn everything down and change it.  And lift a hat to a man whose courage, not just his talent, will be missed more than almost any other’s.

Gustavo Bondoni is an Argentine novelist and short story writer.  He doesn’t have any bestselling fantasy worlds to burn down, but if you like anachronism in service of comedy in your fantasy, he recommends the hotel credit card scene in his book The Malakiad.  Kindle / Paperback.