I recently got that feeling (I’m here to tell you that what can be a joy as a reader can be agony as a writer).  The first thirty-five pages of Evelyn Waugh’s Scoop are so good that I can replace the unknown writer from the first paragraph with Waugh and not feel in the least bit guilty. 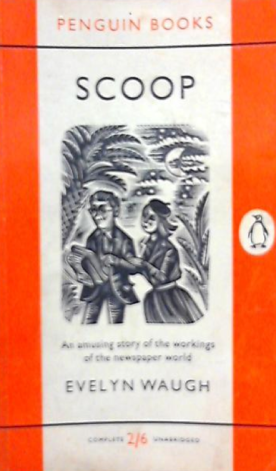 Now, I’m no stranger to Waugh’s work, but Brideshead Revisited is a very different animal.  It’s a beautiful book, and a beautifully written book, but it’s not a brilliant book of the kind that makes you shake your head in wonder that someone can make words do what they are doing.

That feeling only comes once in a while.  Wodehouse is probably the guy who does it to me most often, but Waugh… well, the first thirty-five pages of this one are pure gold.

It can’t go on, of course, and once the story hits Africa, it loses a little momentum and becomes merely very good and very entertaining.  Also, the characterization of how things work in a third world country are spot-on.  Modern readers from the developed world might be offended at the generalizations about banana republic governments, but I’m writing to you from Argentina to say that it’s perfectly all right and you can read the book without guilt.  Waugh satirizes it perfectly.

And that doesn’t even touch on the central tenet of the book: Waugh’s masterful send-up of the British newspaper industry, its lords and ladies and hangers-on.  Though the misunderstandings in the plot are worthy of the Marx Brothers, it comes across as truth… and I’m pretty certain that there’s a central kernel of true story around which each of the anecdotes in the book accreted.  It would be fascinating to have lived back then to know which ones.

Like in Dickens, the characters are archetypical with the most predatory of all being “the girl” as in “boy meets girl”.  In Waugh, of course, boy certainly does not keep girl… and the reasons for it are spectacularly funny.

Also interesting is that Waugh was apparently conscious of the way this book’s style approximated Wodehouse’s.  He even named a character Bertie Wodehouse-Bonner in case anyone missed the point.  Two masters coming together in prose.

I’ve had my eye on the Folio Society edition of Vile Bodies for a while now, and my reading of Scoop has pushed it to the very top of my list.

Do yourself a favor and read this one.  It will make you happy.

Gustavo Bondoni is an Argentine novelist and short story writer.  He has recently launched a collection of linked short stories entitled Love and Death.  You can check it out here. 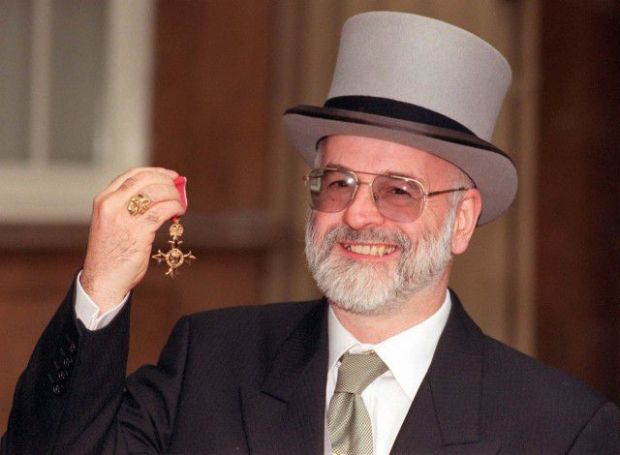 Pratchett’s Discworld is one of the most beloved fantasy worlds ever imagined.  It’s right up there with Middle-Earth and Hogwarts, and yet it goes about the task quite differently.

In Tolkien and Rowling’s world, the universe achieved perfection centuries or eons before the events that unfold in the books.  The characters are usually struggling to keep a way of life alive or–in the case of Tolkien–to return things to the state in which they were back in the good old days.  In both cases, evil is personified in the entity that wants to change it, to shatter that way of life.   In fact, though both Voldemort and Sauron (or Morgoth in the earlier mythology) are evil in other, more obvious ways, their true crime is to try to break the idyll.  It’s a pattern that writers in the literary genre use as well, though in the cases of Waugh, Bassani and Ishiguro they don’t bother to disguise the true nature of the evil.

Readers, of course, can identify and respond to the sense that all times in the past were better.

Pratchett, on the hand accepted none of the wallowing.  The Discworld might be sitting on a giant turtle, perched on the back of four elephants, but it is more flexible and realistic than most other fantasy worlds, because it changes.  And while I have an image of serious writers thinking about how serious issues in our world would be reflected in other places, I have an equally vivid image of Pratchett sitting around and saying… “I wonder how the nutjobs on the Disc would react to suddenly having guns?  Ooh, that could be fun to write.”

And he didn’t do it as standalones that wouldn’t affect his other work, either; every single one of these issues changed the Discworld on a fundamental level, and Pratchett reflected that in later works.

The deepest change of all comes in Raising Steam, sadly the very last Pratchett book I will be reading for the first time.  In this one, he brings the Industrial Revolution to the Disc.  Everyone reading will know that the bucolic, strangely provincial life of even the most sophisticated Ankh-Morporkers are going to change forever, the lifestyle of the previous dozens of books will die away, blown through the desert by the winds of change.

And yet, you find yourself cheering the train-building heroes on.  Let them win, let them burn everything down and change it.  And lift a hat to a man whose courage, not just his talent, will be missed more than almost any other’s.

Gustavo Bondoni is an Argentine novelist and short story writer.  He doesn’t have any bestselling fantasy worlds to burn down, but if you like anachronism in service of comedy in your fantasy, he recommends the hotel credit card scene in his book The Malakiad.  Kindle / Paperback.

Looking back, I wish I’d combined this post with the one I recently wrote about Sir Terry Pratchett.  After all, Pratchett and the subject of today’s post, Niel Gaiman, were friends, collaborators and, by all accounts, shared a sense of humor. 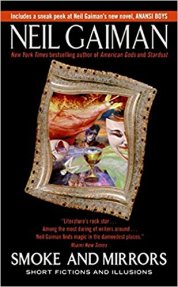 More to the point, two of the books I read: Pratchett’s book of short stories and Gaiman’s Smoke and Mirrors are directly comparable.  Both collect lesser known work by two great writers and will be of more than passing interest to anyone who’s already familiar with their major achievements.

Now, I’m not a Gaiman fan in the traditional sense.  I haven’t read all that much of his work, other than Good Omens which I bought for the Pratchett content and enjoyed.  In light of this, starting with the less-acclaimed shorter work might not seem like the sensible thing to do.

That, of course, has never stopped us before, so why begin now?

So, from this book, I can confidently say that I like some of Gaiman’s writing.  Would I enjoy Sandman or American Gods?  From this sample, I really have no clue.  I always find graphic novels just a little thin and unfulfilling…  American Gods is certainly more promising.

And Smoke and Mirrors?  Definitely enjoyable, and the breadth of Gaiman’s interest in on display here.  Some stories are, naturally more memorable than others but all display Gaiman’s love for the slightly surreal and his sense that nothing is so serious that fun cannot be poked in its direction.  My kind of book.

It feels very similar to the Pratchett, somehow less solid than a novel-length work, but a very satisfying sprinkling.

Of the tales here, one of them sticks out as a nearly perfect example of… something.  I’m not sure what, exactly it is, but if you want to decide for yourself, it’s entitled “The Goldfish Pool and Other Stories” (and you have to admire the kind of lunatic who would put “and Other Stories” in the title of his story, don’t you?).  It’s a strange and wistful and surreal story.  The ending wasn’t what I’d wanted it to be, but that might just have been the point.  I still think of it often.

Of course, if you’re reading Gaiman, that’s because you haven’t seen him on YouTube.  He is one of the most compelling public speakers I’ve ever seen.  If you can take a certain dose of Michael Chabon (did he create the Hipster persona or just perfect it?) without throwing your device out the window, I highly recommend this interview in which Niel Gaiman discusses his relationship with Terry Pratchett in detail.  It is mad and brilliant and still poignant and touching.

Anyway, this is a fun book, but I think the cool kids all started with Sandman, so that might be a good idea too…

Gustavo Bondoni’s is an Argentine writer whose latest novel, the Malakiad, is aimed squarely at those readers who miss Douglas Adams an Terry Pratchett and wish that there were more lunatics writing science fiction and fantasy.  It’s available in paperback and Kindle editions.