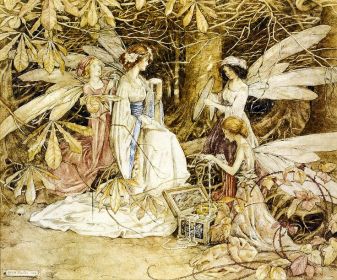 Richard H. Fay is back to the occult this week for his final occult post in this series (but check back next week for a post on a different subject!).  The darker side of fairy lore is something that most people don’t think about…  But he sets the record straight.   You can read his blog here, and we also recommend checking out his Zazzle Store.

Fairies seem to have a confusingly contradictory nature when it comes to their interactions with mankind. Even though the Fair Folk frown upon mortals prying into their secret affairs and may take drastic action when angered by interfering humans, they also display a strange dependence upon the race of Adam. Fairies have been known to rely upon humanity for certain goods, services, and even spouses. Possessing a moral code paradoxical to human minds, the Good Neighbours don’t always exhibit neighbourly attitudes toward mortal rights of ownership. Sometimes they borrow, while at other times they steal, what they want or need. Those that steal may pilfer foodstuff and livestock. They may rob the goodness, or “foyson”, from victuals and cattle. They may even abduct human children and adults. Although selfish individuals are most susceptible to visits from fairy robbers, all mortal kind should be aware of the fairy proclivity for thievery and take the proper precautions.

Members of the often light-fingered other crowd have no qualms about lifting mortal provender needed to sustain their own existence. Fairies will filch a portion of a farmer’s crop and carry off sheaves of corn one straw at a time. On occasion, they make off with milled meal instead of unprocessed grain. Invisible sprites scrape smidgens of butter from pats being sold in the market place. Brownies magically ingest ill-gotten junket under the very noses of dishonest servants. Buttery spirits and abbey lubbers devour the food and drink of shady taverners and self-indulgent monks. At times, the Little People lure mortal-owned cattle into their knolls to be milked, bred, or butchered for a feast. At other times, they steal milk right from dairy cows browsing the meadow or sequestered in the barn.

More often than thieving the items themselves, fairies may simply remove the goodness, or “foyson”, from desired food and livestock. What is left behind looks solid enough, but it lacks true substance or nourishment. Cheese thus denatured floats in water like a cork. Bannocks so altered appear hearty enough, but they never fill a man’s stomach no matter how many are eaten. Cows whose spirits have been whisked away to Fairyland may continue to wander farmer’s fields, but they produce no milk. An elf-taken ox sickens and dies, and upon its death will prove to be merely an alder wood simulacrum of the actual animal. Land with its goodness stolen by the Gentry yields a slender harvest and produces fodder empty of sustenance.

Far worse than the theft of goods or the removal of the substance from such goods, the fairies also steal away mortal children and adults. The Fairy Queen’s dark butler, the far dorocha, fetches men desired by his mistress. The Gentry in general nab nursing mothers so they can suckle fairy infants. Midwives carried off are expected to perform their duties in Fairyland. Young craftsmen beguiled into service become fairy bond-slaves. Handsome lads and pretty lasses captured by the Fay are paired with fair spouses to replenish the dwindling fairy strain. Golden-haired babes and children looked on with envy are especially vulnerable to abduction by the Wee Folk. The youngest of mortals taken beneath the fairy hills either grow into full members of fairy society, or find themselves offered as part of the Teind, the septennial tithe the fairies pay to Hell.

As with stolen cattle, the Good Neighbours may leave behind a substitute for the kidnapped human. This substitute is called a changeling. In the case of abducted adults, the fairies frequently replace the mortal with a replica body, or stock. In the case of snatched children, the changeling may be a cantankerous old fairy well past his prime, or a sickly fairy child, or a wooden stock roughly formed to look like a human babe and imbued with glamour to simulate life for a short while. In almost all cases, if the truth of the changeling’s identity is not soon revealed, it eventually appears to wither and die.

According to some, fairies only take from miserly mortals or humans who grumble about that which they do not deserve to have, but this may not always be the case. However, laziness or carelessness definitely makes one more likely to be a victim of fairy theft, especially if one ignores certain precautionary measures. The mark of the Cross on the first bannock stops the Fair Folk from sapping the nourishment of the whole batch. Bells, spells, or rowan and red thread protect cattle. Daisy chains worn by small children drive off potential fairy abductors. An open pair of scissors hung above an infant’s cradle, or steel pins stuck crosswise in the babe’s clothes, keeps the child safe from being switched with a changeling. An iron horseshoe hung over the threshold protects the whole house.

Food seemingly devoured by mundane pests may have actually been pilfered by the Fay. Disappearing livestock or missing persons might now be residing in Elfame. Greed or an unappreciative nature can make humans more vulnerable to attention from light-fingered fairies, but all men who neglect traditional protections risk the theft of food, cattle, or even the abduction of their wives and children. After all, as the old saying goes, it’s better being safe than sorry, and those who’ve become victims of the thieving Wee Folk may be sorry indeed.

An Encyclopedia of Fairies by Katharine Briggs

A Field Guide to Irish Fairies by Bob Curran

A History of Irish Fairies by Carolyn White

The Illustrated Encyclopaedia of Fairies by Anna Franklin

The Vanishing People by Katharine Briggs