People who’ve been following along for more than a decade (I know there are still some of you around from the LiveJournal days), will remember that I reviewed a couple of Robert Flaherty’s documentaries there, particularly Nanook of the North during our 1001 Films viewing.

I’ve never really been a fan of documentaries with scripted action.  For my money show me footage from the era, if it existed, or artifacts, but dressing characters up and having them play a role which might or might not be true to reality is just silly. 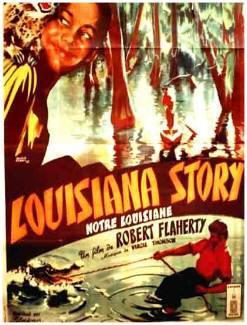 Within this context, Louisiana Story has one thing going for it: it was filmed during the era it attempts to portray, which makes many of the background images, at least, realistic.

I assume costumes, customs and creole are also true to life because Flaherty never used professional actors, but let locals play roles as themselves.

So watching the lazy life on the water take place is a balm, as is seeing the inside of a Cajun house.  The film is very much softened–none of the real issues that Cajuns faced, and none of the consequences of extreme poverty are shown–but perhaps all the better for it.  Watching it in 2020, there is no real harm in idealizing a lifestyle that has all but disappeared today, and it makes the .

On the other hand, the money to make the film came, at least in part, from Standard Oil, which is a mixed blessing.  I’m pretty sure no oil rig ever was as clean, peaceful and unobtrusive as the one portrayed, but I’m also delighted to have seen how a 1940s rig functioned.  Some of the most fascinating scenes in the movie are the ones where drill is being fed into a hole.  Talk about tense moments.

Anyway, I enjoyed watching this one as a document of an era, but it needs to be taken with several grains of salt.

Gustavo Bondoni is a novelist who writes across several genres and lengths.  His latest novel is Ice Station: Death which, as the title implies, is a horror book set in Antarctica.  You can check it out here.