Ernest Hemingway once famously stated that there are only three sports: bullfighting, motor racing, and mountaineering; all the rest are merely games.

It’s a good thing Ernest isn’t around today.  He’d be down to only one and a half, and that half is dwindling fast.  In fact, if he was magically revived, he would likely look around at the state of the world, especially the state of what passes for individuality and (he would be particularly shocked at this) masculinity and reach for the shotgun all over again.  We do not live in the kind of place where a man’s man would feel comfortable – or a woman’s woman for that matter, although it’s doubtful that Hemingway would have cared about that.

Some people will tell you that this is what progress looks like, but here at Classically Educated, we beg to differ.  We believe that this is what George Orwell was warning us about.  We live in an era where the hand-wringers, the timid and the nosy neighbor write the rules for everyone else, and most people seem not to understand what has been lost in the process.

We’re not talking here about the advance of the political correctness epidemic which we’ve discussed before.  We’re talking about something that, though related to PC thinking, isn’t pushed by the lunatic-fringe thought police, but is much more accepted by society in general.

Let’s look at Hemingway’s sports.  Bullfighting is being decried as cruel by many groups, and popular opinion is swinging in favor of the protesters, and is surviving by a thread only in areas where it is traditional and continued – but who knows for how long.  The focus on bullfighting was always on the sheer bravado of a man stepping in front of a huge, enraged, and dangerous animal, and the fact that, reasonably often, the bull wins.  The protests focus on the cruelty to the bull, and ignore all other elements, essentially saying: “it’s unfair and rigged.”  To this, we reply: “OK, then, you do it!”  Bullfighting will probably end up being outlawed soon, and the world will be poorer for it (and meanwhile, cruelty to animals on a much larger scale will still be accepted worldwide because it is necessary to feed the poor). 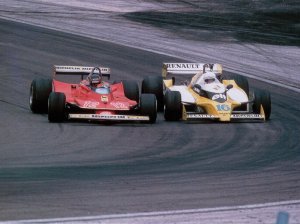 If Gilles were alive today… he’d probably be climbing mountains.

Bullfighting is half gone, but motor racing is worse off. Except for niche motorcycle racing on the Isle of Man (thank anything you believe in for the Isle of Man TT!), motor racing has been emasculated to the point where it is no riskier in most cases than playing video games.  While making cars safe is fine, they’ve even removed the grass outside the tracks, so if a driver goes off, there is no risk of not finishing the race.  This might be OK for junior formulas, but is not cool in top formulas…  and doing that to the Parabolica at Monza is a bigger sacrilege than burning bibles, Korans or whatever sacred symbol you prefer.  If the powers that be at the FIA want to know why their ratings are going down, look no further than emasculated tracks and drivers who act like entitled teenagers because the era of hard men living with big risks are long gone.  The public no longer finds idols in these people.

One of the greatest observations about life in motorsports comes from that great philosopher Peter Egan, who once observed that, when motor racing was having a huge upsurge as recreation, it was due to the fact that the people doing it thought (and we paraphrase): “B-24s are dangerous, MGs are fun!”  They were, of course, correct.  Perhaps what is needed is to recover a sense of proportion.

So that leaves mountaineering.  Mountaineering still rocks, as long as you’re doing it up on a big mountain, and not in some namby-pamby wall on a gym.  Double macho points if you’re above 6000 meters in the Himalayas.  Hemingway gives you the thumbs-up.

If these changes were only limited to Hemingway’s sports, it would be bearable.  But it’s not.  Have you tried riding a motorcycle without a helmet, or even a bicycle in some places?  It’s gotten to the point where skiing is illegal without helmets on some slopes, which kind of defeats the purpose of skiing itself.

Now, ask yourself: as a grown adult, who, other than yourself, can you harm by omitting the helmet?  OK, now why does society have ANY right to legislate that?  Answer, other than for litigation purposes, it doesn’t.  So a simple solution is to have people sign waivers which holds society harmless in the case of non-helmet-wearing, and have the hand-wringers butt the hell out.

Of course, the likelihood of that happening is about the same as these same people suddenly having the epiphany which tells them: “hey, people having risky fun is fine!”  Won’t happen.  Interfering concerned citizens will continue to be a bane on the existence of anyone with a bit of an independent streak.

Which brings us to Football (NFL Football in this case, not rest of the world football, which we’ve already written about).  The latest question around this nicely action-filled sport is whether it’s worth watching after one man – Ray Rice – was shown to be a domestic violence criminal, and the league was remiss in policing it.

The obvious answer is: of course it’s still worth it; nothing has changed, and the actions that are being reported, while vile, have absolutely nothing to do with the league.

Of course, the 24-hour news cycle and the hand-wringing nature of American press means that the stupid question is asked and asked in seriousness. Hell, there are even calls for the commissioner of the NFL to resign over something that has nothing to do with the on-field product.  The only thing one can say is that everyone needs to take a step back, relax, and get a sense of proportion back into their lives.  I am glad to see that there has been a suit filed by Rice against the league for its action against him – there are civil and criminal courts to deal with this, and removing someone’s livelihood for something that took place outside the workplace is vile.  Yes, he needs to be punished, but there are appropriate and inappropriate fora for said punishment – and the sensationalist media and outraged public are not, and never should be, a jury.

Plus, we personally don’t care if the entire league is made up of murderers, assailants, thieves and (gasp, horror), people who download content illegally.  Audiences are, despite attempts to make it seem that way, not watching for the values of the thing (other than those inherent in this kind of sport, such as teamwork, sacrifice, guts and glory).

Finally, we believe that all defensive players should be allowed to hit the quarterback as violently as they like.  This is not a ping-pong match. (OK, that isn’t specifically related to the topic, but it has to be said!).

Essentially, what we’re trying to show is that society’s pendulum has swung too far in the direction of timidity and health and safety at all costs, even that of an individual’s freedom to manage their own lives.  Those people who are frightened at everything need to move into bubble-wrap packed houses and get out of public life as soon as possible (to those peopls, we say: remember, there are germs out there, and even if you’re an online activist, there are computer viruses waiting.  Beware!  Beware!  Much better to just lock yourselves up somewhere and stay safe).

We don’t see that happening, sadly.  The world will continue to be increasingly safe, beige and porridge-like.