We’ve been catching up on the 1001 Films to Watch Before you Get Run Over by a Number 3 Bus, and have reached the classic It’s a Wonderful Life.  Like many of Frank Capra’s creations, it’s a seriously sentimental flick, but it doesn’t seem that way while watching it for the first time (I was never a big fan of watching the endless run of Christmas movies the networks liked to show when I was a kid).  The reason is that, though the film itself is incredibly sentimental (guy can’t follow his dreams but makes everything better because of it), the individual scenes are lightened up with humor and thereby don’t drag on unnecessarily.  Capra’s screwball comedy past (including great stuff like It Happened one Night) serves him well and turn what could have been a spectacularly earnest and serious film into something generations of audiences have enjoyed.

I won’t bore you by telling too much about the film.  Literally hundreds of professional critics have discussed it already and most people have seen it.  Suffice to say that it is a typical early James Stewart vehicle: aw-shucks good guy takes up most of the attention and teaches us all the right way to act.  James Stewart was Mr. Rogers before there was a Mr. Rogers.

But I will take the time to say that this one is likely reaching the end of its rope.  Millennials, their children and the helicopter parenting generation will kill it off.  Why?  Because it’s the story of a guy who sacrifices and does the right thing, leaving aside his hopes and dreams for a life that, though frustrating to him, turns out to be, as the title tells us, a wonderful life.  Audiences until the eighties or so probably understood that.

But younger generations are taught that they are all unique (I’ve heard the term special snowflake a lot, and though derogatory, it does seem an apt description of newer generations) and that success will come if they only follow their dreams hard enough.  Don’t compromise, be passionate. 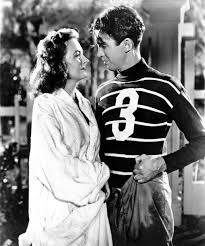 All of the above is good advice if you happen to be one of the über-talented or (in case you want to have a starring role in a Hollywood film) spectacularly pretty / handsome ones.  If you aren’t, you may soon find that the dream is just out of reach and that real life doesn’t care about your dreams.  What do you do then?

If you’re in Spain, you become an “indignado“, which was a young people’s movement that essentially said: we’re young, we have no marketable skills, and we don’t want to study while working a crap job, so the government has to give us money.  It later morphed into an attempt at socialist anti-austerity rhetoric, but most responsible socialists didn’t want too much to do with it.  It was a direct inspiration for the Occupy Movement in the US.

Whether one if for or against the western world’s capitalist system (whether it be a more American style free market or a more regulated European version), you’ll likely agree that having a plan to be a useful member of society is never a bad idea.  The current generation of young people have gone on record by radicalizing their unwillingness to do so.  Is it the entire generation?  Probably not, but a vocal few can ruin things for everyone, and then you get bloggers saying that you’ll probably hate It’s a Wonderful Life.

Of course, I might be wrong, and Millennials, as they mature, might be able to appreciate the message in this one.  I’m a Gen-Xer and was brought up with the motto “greed is good” and I enjoyed it, so perhaps there is hope.

In a film with such a huge cast, there were always going to be some members still up and around today, so I’d like to give a shout out to three I’ve been able to identify:  Karolyn Grimes, Jimmy Hawkins and Virginia Patton.

Also interesting was the presence of an Argentine Actress named Argentina Brunetti (it wasn’t unusual for people to name their children Argentina in that era).  Her career spanned all the way to an episode of Everybody Loves Raymond, and yet I don’t think she’s at all famous in these parts.  I’d certainly never heard of her.

My verdict is that if you have to watch a sentimental film, this is a good one, but don’t expose your teenager, whom you’ve told countless times how special he is to this one.  The mixed messages will be confusing.

Gustavo Bondoni is an Argentine novelist and short story writer whose most recent novel, Incursion, was published in late 2017.